I’m a couple hours past the deadline – on my own challenge – can you believe it? But, be that as it may, I have finally finished my story, so I’m ignoring the deadline. If anyone else out there still wants to write for this challenge, please feel free to do so any time this week as well – and be sure and post your link on the original challenge page. 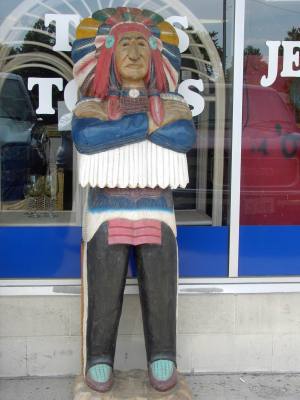 LOVE WILL FIND A WAY

“Gabriel Bay Lighthouse: Antiques and Unique Gifts – Martee Somersby, Owner.” Those words were music to the ears of Gabriel Bay’s newest entrepreneur. And this business, in the renovated lighthouse, was a life-long dream come true.

The grand opening had been a huge hit, and business had been brisk ever since. She even sold fresh fruit and vegetables from local farmers, and that drew even more customers. In fact everything had gone exactly as Martee had dreamed until about three months ago, when she’d walked into the store and found the huge wooden Indian maiden gone.

The sheriff and his deputies had searched the whole store and every inch of the property. Nothing else was missing, and there had been no sign of forced entry – but not another living soul had a key.

“Why?” she asked the sheriff. “Why would anyone want to take just the wooden Indian? It wasn’t even worth much money, but I bought it because it was such a lovely piece and meant something to me.”

“Well, beats me. But I guarantee you we won’t stop until we have the thief, Miss Somersby.” He stopped and cleared his throat. “I understand you keep a gun on the premises.”

“Well, m’am, I don’t think I have to tell you to be careful with it, but if you have any more trouble, I’d sure like to think you’d call on us instead of trying to handle things yourself with a gun – if at all possible.”

“You can count on it, Sheriff,” she’d told him. “I have no desire to become some kind of heroine.”

Weeks passed, and she’d pretty well given up the hope of recovering her property. Her real sorrow wasn’t so much the money involved, but the fact that she felt particularly attached to that one item. She’d loved wooden Indians since she was a child and had seen her first one outside a modern trading post in Arizona. She’d been amazed by it, and her Grandfather had told her the history of the life-size carving.

A couple years later, while listening to the radio, she’d heard the song “Kaw-liga” — the story of a wooden Indian in front of a store who fell in love with a wooden Indian maiden in front of a neighboring. But he never declared his love — even when she was sold. Martee’s childish heart had imagined an entire story about Kaw-liga and his Indian princess, and from that day on, every place she traveled, she made it a point to look for and visit every wooden Indian statue she could find. When she’d discovered this particular carving of an Indian princess, she’d bought it without hesitation.

More weeks passed, and still the crime was not solved.  Martee missed her Indian princess so much that she got out her copy of “Kaw-liga” and played it over and over. In fact, she often played music in the store and included that song in the mix. People from the area sympathized with her and stopped by periodically to mull over the possibilities of what could have happened.

Today old Benny Briggs sat with her. Benny was something of a legend in his own right, known throughout the county as a “mighty-fine storyteller.” He often told of the old Indian tribes who had inhabited the region and shared many of their legends – updated a little in Benny’s own style. He sat, drinking coffee with Martee on this particular day and listening to her tell the story she’d made up in her own mind as a child about Ol’ Kaw-liga.

Finally, he said, “Well, Miss, did you ever think that maybe this here Indian maiden you had was the one Ol’ Kaw-liga was sweet on?”

“Well,” he said, rising from his chair and putting on his hat, “I been thinkin’ about it a lot. Woudn’t surprise me none to learn that Ol’ Kaw-liga finally got tired of livin’ a life without love and came lookin’ for his maiden. Once he had his courage up, when he found her, he’d have just whisked her away.”

“You know what, Benny: no matter how many times I imagined that story, I never could end it until Kaw-liga had married his Indian maiden.”

“Well, Miss,” Benny said, opening the door and then turning back to give her a wink, “I’d say maybe you managed to believe your story enough that it came true.”

Below, you will find a video of the song “Kaw-liga.” Hope you enjoy it.