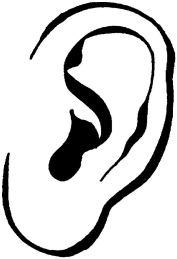 In response to today’s Daily Post Prompt (Sound), I’ve offered the first few pages of a story in progress. Just a little sci-fi to flavor your day.

“In other news today, Dr. Leopold Barnes, director of the U. S. Atmospheric and Meteorological Testing Center located inside the Arctic Circle, issued reports of unusual occurrences of silence in a fifty-mile radius surrounding their base. ‘For a period of eight or nine hours, there was no sound of any kind,’ said Barnes. ‘It was the strangest phenomena I’ve ever experienced,’ he added, ‘and all of my co-workers here agree. We could hear nothing, even when we spoke or pounded on a door.’ Barnes went on to say that the experience lasted only for that time period, and then things returned to normal. Scientists from the AMTC are doing further investigations, and Dr. Ruben Perez, director of the center’s headquarters in Leadville, Colorado, has declined comment until those investigations are finished.”

Ruben switched off the small TV in his office, his thoughts whirling, his adrenalin building. He walked to his desk in the next room and pulled a file from his drawer. It contained hard copy of a report that had been e-mailed to him yesterday from the British-manned testing base at the South Pole. The e-mail had been sent to seven scientists on a pre-approved list, and he’d been unable to get the words off his mind all night. “… total and absolute silence for a period of 7 hours,” it had said.

He picked up the sheet he’d printed out earlier. “Not one machine noise could be heard. We spoke to each other, but could hear nothing and, in fact, had to rely on reading lips and sign language even to do the work necessary to run some tests and figure out what was happening. So far, we just don’t know. But at the end of the 7 hours — can’t be more precise since it took several minutes to even realize that the situation existed all over the base – but at the end of that time, all sound returned and hasn’t fluctuated at all in these past 3 hours.”

That report had come in at almost midnight last night, and now this similar experience involving their own people up by the North Pole today was too much of a coincidence to be coincidence. Based on his experience – which covered the first twenty years of the new millennium – it was one for the books. He picked up the phone, punching in numbers memorized long ago. “Hello, John.” He spoke briskly, but the warmth in his voice denoted his long friendship with the listener.

“Same here, John, but I’m going to get right down to business this morning. You’ve, no doubt, been apprised of the report coming out of Barnes’ Arctic base this morning.”

“Yes, I read it this afternoon.” He paused, and Ruben waited. After the slight hesitation, John continued. “Boy, I’ve experienced some odd phenomena in my forty years of research, but this one beats the best of them in my book.”

“Right. I agree, but there’s more. Have you received any word about the e-mailed report from McGregor at the South Pole?”

“McGreggor? No, is he experiencing something similar?”

Ruben picked up the printed report again to read it to his colleague. “Well, I’m on the list of seven men who are kept updated on the work there, and let me read you my e-mail from last night.” He read the whole text and waited.

A long, low whistle sounded through the line. “Man!” Another pause as both men processed the facts they’d encountered. They couldn’t refute them, but they certainly didn’t want to believe them. Finally Ruben broke the silence.

“No thoughts on it?”

Ruben sighed. “That’s not like you, John. You’re generally the last one to consider something alarming. What’s the difference here?”

John Cartwright sighed heavily. “I think it’s time for me to share some things that I’ve been keeping an eye on – privately – for the past few months. But, Ruben, this information has to be kept confidential until I decide how far to spread it. I’m sure I can trust you – and Soren Petroff. Does anyone else come to your mind who would be the soul of discretion in the face of some evidence that could – just possibly – be world-shaking?”

“Whoa! You mean you’ve been looking into something connected with this loss of sound for several months?”

“Let’s just say that I’ve been checking out a couple of minor – very minor – events that I’ve encountered and wondered about. Now … in the face of these two larger events … I don’t think I want to keep it to myself any longer. But I can’t begin to impress on you how vital secrecy is at this point, Ruben. I’m sure you can appreciate that fact.”

Ruben nodded, even though he knew his friend could not see him. “I do understand. I’m not arguing that point. I guess … well, I guess I’m just still in some degree of shock where all of it’s concerned. But, as far as a good man with a closed mouth is concerned, I do have a suggestion – although it’s not exactly a good man.”

Ruben couldn’t resist a chuckle. “I’m talking about Dr. Lenora Coleman, John. She’s worked with me here in this center for three years now, and I’ve rarely worked with anyone more intelligent – or wise. She not only has what it takes in the brains department, but she seems to have a kind of sixth sense about how to use the knowledge she has to the best advantage for all parties concerned. That’s a rare quality in our work.”

“Well, if you have such high regard for her, I’m willing to let her in on the meeting. But, Ruben, it will have to take place at my home in Denver. I’m not taking any chances of being overheard by anyone else at this point. This whole situation may be one short, aberrant period of atmospheric distress and may have no meaning for the future at all. So I don’t want anyone overhearing bits and pieces and running wild with them. I don’t think we can afford not to be careful with our discussions at this point.”

John’s words were reverberating through Ruben’s mind even as he answered. “Agreed. When should we set the meeting?”

“I’d like to suggest tomorrow morning if you and Lenora can make it that soon. Say 10:00. I’ll give everyone lunch.”

“I’ll check with Nora and get right back to you.”

“Good. I’ll do the same with Soren, but I’m pretty positive he’ll drop anything else when I tell him the details.”

Ruben couldn’t sit still. He got up and paced his office, hearing John’s words over and over: “… may be just one short aberrant period … may have no meaning for the future …” Ruben rubbed the back of his neck, trying to erase the tension that had grabbed him with those words. Before that statement, he’d felt they were dealing with a weird, but interesting phenomenon of nature that would prove to be one for the text books but little else. With those few words – coming from one of the nation’s most eminent scientists, whose hunches Ruben had learned long ago to trust implicitly – he could feel something else creeping in. He refused to acknowledge it as fear. He tore his thoughts away from the repetition of words and started down the hall to Nora’s office.

The following morning four puzzled scientists convened in the dining room of Dr. John Cartwright. The three men knew each other well since they had worked on several projects together over the years. Ruben introduced Dr. Coleman to his friends and explained that he had briefed her on all that he had discussed with John the previous day.

“Nora told me during our drive here that she spent two years working with Dr. Armond Newman in Germany.”

Soren looked up sharply. “The physicist who received so much notoriety for his work in acoustics?”

“Yes,” Nora said. “He discovered some interesting fluctuations in how sound waves traveled through air and through several other substances when there was a change in the magnetic field around the immediate area in which the sounds were being emitted.”

“But tell them about the experiments he did even after his article was published,” said Ruben.

“I was fascinated by some of the work he was doing and kept asking so many questions that he finally confided in me about some private experiments he was conducting and eventually allowed me to observe them and take part in them. He manipulated the magnetic fields in these experiments until he was able to strike a metal gong with a metal hammer, but not one sound came from it. Or, at least that’s what seemed to be the case. But when he checked the instruments that measured the sound waves themselves, he discovered that sound had been emitted, but was not picked up by our ears.”

“Fascinating,” John said, scooting his chair closer to the table and leaning his elbows on it, allowing him to come closer to Nora as she spoke.

“Yes,” she said. “I was totally fascinated – in fact I was captivated by all of it. “He then called in his dog and had him sit with us as he repeated the striking of the gong. Again we heard nothing, but his dog did. And, as I’m sure all of you know, dogs are capable of hearing a much higher pitch than humans, but are deaf to sound pitches below 40 hertz. His dog heard the gong, but in a later experiment, where Dr. Newman tried several different materials which would produce sound at much lower hertz than the gong, his dog heard only one of those experiments, and he and I still heard nothing.”

“And you say it was the change in the magnetic field? Nothing else?” asked John.

“That was the most fascinating part of the experiments. Absolutely everything remained the same in every experiment except the magnetic field around the instrument emitting the sound and its immediate area. With every significant change in that magnetic field, the ability to hear the sounds changed as well.”

“But physics doesn’t lead us to believe that the magnetic field plays that large a part in the emission and transmission of sound waves,” said Soren.

Ruben spoke for the first time then. “Well, up to this point in time, science hasn’t proven a connection, but you know as well as I, Soren, that one of the things we pride ourselves on as scientist is that we are learning more about the universe and its vagaries all the time.”

John spoke again. “Ruben, you have a degree in geomagnetics. Was there anything – anything at all – in your studies that hinted at a possibility of connection?”