I haven’t had much time to write lately, so since the Friday Fictioneers challenge is doing summer reruns this month, I took advantage of the situation. I’m “reruning” the story I originally wrote for this challenge way back in ?????

Photo copyright belongs to Rich Voza.  My story is below the picture. 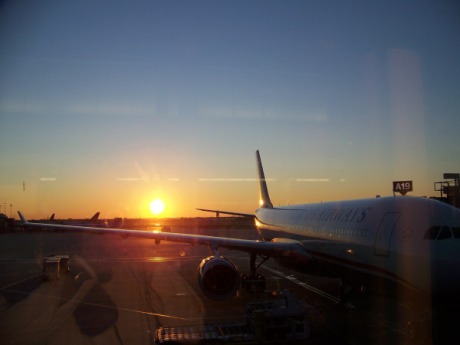 He was Cherokee, she Scottish-American. But the moment they met in the airport coffee shop, they were connected. Waiting out the fog, they talked like old friends. When her plane was called, he carried her bag to her boarding gate.

A question in her eyes, she said, “Wow, Chicago and Dallas – talk about two people going in opposite directions.”

Light flared in his eyes as he realized she didn’t want this connection to end either. He traced one gentle finger down her cheek.

A spark in her eyes leaped to his, just as the boarding line began moving, and he promised: “I will see you again, Joy.”

2 thoughts on “Friday Fictioneers Reruns: ‘But Not Always’”