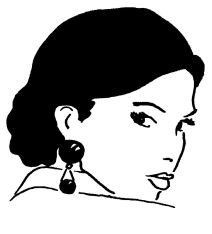 My impression of her was that she was a snob of the first order, sold on herself, and way too aware of how much money she had to throw away on her frivolous lifestyle. Everywhere she went, she wore only designer clothes and shoes, carried $200.00 designer handbags, and reeked with the scent of the world’s most exclusive colognes. I had read about her in the newspapers and tabloids for years, and I knew she was prone to taking all she could get and treating people who worked for her like indentured servants.

So when I arrived at her office for the interview that my editor had set up, I was surprised to see her sitting on the floor playing jacks with a six-year-old girl. When I introduced myself, she rose from the floor, offered me a seat on her office sofa and a cup of tea. Then she lifted the little girl to her feet, kissed her cheek, and told her to run to her mama and come back at noon when they would go out for corn dogs.

I sat there on the sofa with my mouth open until she sat in a chair beside and smiled broadly. “Well, now,” she said, “You’re Catherine Field, from Women On The Move magazine. I read that periodical every month without fail, and I’ve enjoyed your articles immensely. You have a real talent.”

I was stunned — couldn’t seem to find my tongue. Finally I stuttered out the words that I was thinking — about being surprised to find her playing jacks with the little girl she’d called Deborah.

“Oh, that,” she said — and gave a little chuckle. “You see, when I was a child — well, actually, until I was about sixteen — I lived in abject poverty. I barely had clothes enough to wear to school — when I went to school — and I never had dolls or tea sets or anything like that.” She paused and became lost in her own thoughts for a moment, then continued.

“But, you know, as odd it it sounds, it wasn’t the baby dolls or the tea sets that I missed the most. I remember seeing some other kids at school playing jacks at recess, and they always had so much fun. I wanted to play too, but they wouldn’t have anything to do with me — because I wore shabby clothes and hadn’t always had a recent bath. None of them would teach me to play, and I just watched them day after day, wishing that I could have a turn.”

“So when I grew up and managed to work hard enough to make all the money I needed, I bought scores of sets of jacks — all colors. And I play all the time. Deborah is one of my favorite partners. Her mother works for me, and I let her bring Deborah to work with her on Fridays because her baby sitter can’t come on that day.”

I swallowed my shame the best I could. It stuck in my throat and almost choked me, but I managed to get through the interview. The woman I got to know during that hour was so different from the impression I’d amassed in my own head that I felt as if I were interviewing someone else entirely.

All the media reports had focused on the surface elements of this woman — as I had — and strategically formulated a persona that fit what they wanted the public to read and believe. I fell for it completely — even though, as a journalist, I should have considered the possibility of such a hoax.

I can’t make up for all the horrible things I’ve thought and felt — and said — about her in the past. But I can do my best, through the article I write relating this interview, to make sure the rest of the world gets the correct impression of her from this point on.