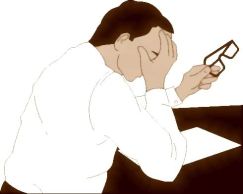 “I don’t know what to do,” Neville groaned, rubbing his hands roughly over his face. Then he pushed his laptop out of the way and leaned both elbows onto the coffeehouse table, propping his chin in his hands.

“What’s wrong?” Clarence, the waiter bussing the table next to Neville’s, turned to question him

Neville looked up, startled. “Oh … blast … I didn’t realize I had said that out loud. Sorry,” he added looking sheepishly around the room to see if other customers had heard. He was relieved to see that Elixir of Life Coffeehouse was having one of its quieter days.

“No problem,” Clarence answered and walked over to Neville’s table. “Can I get you a refill?”

“Yeah, that would be great,” Neville answered, handing the boy his cup. “It’s been a rough writing day.”

The young man returned in record time with Neville’s refill and stayed to talk a moment. “Do you have what they call writer’s block?”

“No.” Neville shook his head and continued. “No, Clarence. This isn’t writer’s block. In fact, I almost wish I did have that dreaded condition. My problem isn’t that I can’t get the story to move along. This story is moving along at an incredible pace. The problem is that it’s writing itself, and my original plot is unraveling as fast as I can put my fingers to the keys.”

“You mean you’re not in control of your own story?” Clarence looked at Neville as if he had lost his mind — just a little. And that made Neville laugh.

“Don’t worry, my boy,” he said. “I’ve not gone bonkers yet. And … thanks for making me laugh. It helps. But to answer your question, no, I’m not in control of my own story.”

“Well, how does that happen?” Clarence asked, really into this new information he was being exposed to.

“Well it’s not too unusual for a writer to get into a novel and find that one of his characters seems to gravitate in a direction other than what he had originally planned — or that the story seems to be flowing toward an ending that’s different from what he jotted down in his outline. But what’s happening in my story is different.”

Neville shook his head and sighed. “I’m not sure how it’s happened, but every character seems to be taking on a brand new identity and making his own decisions. The guy I had pegged as the hero has suddenly become the villain, and the woman he loves is rapidly developing feelings for his best friend — which means he will probably end up killing his best friend — he’s already entertained the idea — and maybe even offing the woman as well.”

“But does it matter who ends up being the villain and the hero — I mean — as long as you have one of each, it’ll come out even, right?”

Neville chuckled. “Well, it’s not quite that easy. My publisher assigned me a contract to do a specific kind of story. One that will be a believable sequel to my last three novels. They were moneymakers, and I’d hate to mess up a record like that. I spent the money I made on them, and now I need more.” He rubbed his face agitatedly again. “Besides that, I’d be breaking my contract if I didn’t give them what I guaranteed.”

“MmMmm, you do have a problem,” Clarence said, so engulfed in the conversation now that he just sat right down at the table beside Neville.  They both sat in silence for a moment, and then Clarence asked, “Well, why don’t you just delete all that part that changed and go back to your first chapter and start over on the story you intended to write. That would take care of it wouldn’t it?”

“Well, that’s the other problem. I’ve totally lost track of the story I intended to write … and besides ….” He paused and glanced off to the side, lost in thought for a long moment. Clarence waited, figuring Neville was trying to work out a plan.

Suddenly Neville looked back at Clarence with a smile on his face. He looked serene rather than agitated, and Clarence was a little confused. “You figure something out? How to stop this runaway story?”

Neville reached over and rested his hand on Clarence’s shoulder. “Clarence, my boy, I’ve made a decision. I’m going to give this story my whole heart and soul and let it lead me wherever it wants to go.”

“But what about your contract and all?”

“Blast the contract,” Neville said, beginning to close up his laptop and slip his notes into his briefcase. “If that publisher can’t see the truth about the value of this story, then he can sue me.”

“No more ‘but’s‘ my boy,” Neville answered, rising from his chair, laptop under his arm. “This is the best damn story I’ve ever written in my life, and I’ve just decided I’m free enough to give my creativity its own head and let it take me to my destiny.”

He slapped down his last five dollar bill as a tip for Clarence and headed out the door, whistling.